But of course, all parents will attest to that, especially in the first few months of a baby's life. 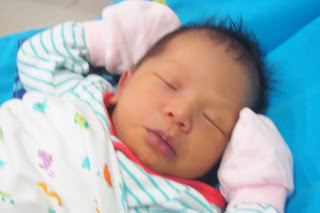 as in, the URL. It's nothing major, just streamlining my Google accounts and decided to have it all under one roof. So, come by the new "Tinge of Blue" and stop over for a virtual cuppa and all. See you there!
No comments:

on the plate - Frames, Sunway Pyramid

Was supposed to try this place out much earlier at the recommendation of a friend, but when we tried to look for it at its previous location at TTDI Plaza, it wasn't there anymore. Good thing I guess. TTDI Plaza is absolutely horrible, especially in terms of getting there, parking (I've never seen such a poorly designed car park ever before in my life. The architect who designed that car park must have been drunk when he thought it up), and the cigarette smoke that wafts through the air due to all the pubs and stuff. Sunway Pyramid is a much nicer and more accessible location.
Frames is a cosy place that has a nice comfortable ambiance, they've got framed photos all over the restaurant, photos taken by amateur photographers who otherwise probably wouldn't get a platform to display their works. The food is pretty good too. 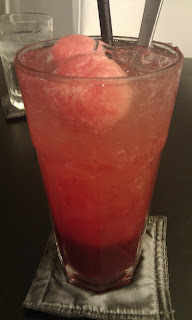 Barrae (RM8.90) - one of their signature drinks, it's soda with strawberry puree, and other fruits as well. Nice and refreshing. 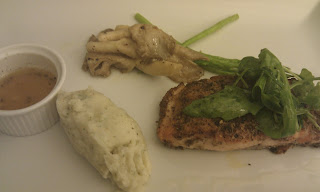 Crusted salmon (RM26) - one of the most expensive items on the menu. It looks like not much, but it actually is substantial. A nice fillet of salmon crusted with herbs complementing the tender flesh of the salmon. Complete with sauteed mushrooms and asparagus, some aragula leaves, and a tasty mash (sorry I had mutilated it before I took the photo), and a lovely butter reduction that adds a different dimension to the meat. 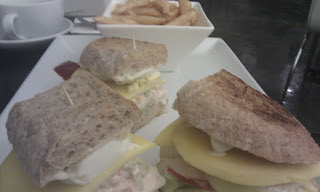 Mango tuna sandwich (RM18) - one of the owner's creations, it has lots of tuna accompanied by mango slices, sliced eggs and vegetables, encased in a nice herbed bread. Sorry the picture doesn't really do it justice. The flavor combination is very good, the sweetness of the mango complementing the tuna and other ingredients very well. And if you're feeling wierded out by the combination - don't. The sweet & savory really do work well together in this one. 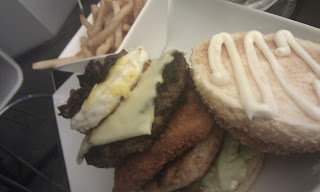 the Burger (RM22+10) - It's supposed to be either a beef, fish or chicken burger. Apparently if you're hungry you can add another patty (beef, chicken or fish) but another RM5. My friend upped the ante by asking for one of each. The burger comes with the usual fixings, and a fried egg to boot. All patties are hand made in the restaurant, and seasoned very nicely. Even the fish pattie is actually a real fillet of dory that's breaded and fried, not some reconstituted fish parts thing.
Frames is a nice place where you can chill out and hang out, with good and friendly service and good food and drinks, I do recommend it for a good time out with friends or a quiet dinner.
Food: 7.1/10
Drink: 6.9/10
Service: 7.1/10
Location: Oasis Boulevard, at Sunway Pyramid. Go out the main entrance (facing the highway), and make a right turn, and you'll see it.
1 comment:

Right. Again, I apologize for the long wait for any updates to this blog. I get busy, you know?

But anyway, I digress... This post is long overdue for one of my favorite joints so lemme put it up now before I procrastinate and leave it for much longer...

Betty's Midwest Kitchen is a relatively new place, it's been open for about a year or so (opened in 2009 if I'm not mistaken). It's a family run business, the wife does the cooking, the husband manages the place and the grown-up kids help to serve and take orders and stuff. It really is one of those honest to goodness places where you really have that sense of family going on. It's a nice, cosy place, someplace where you can enjoy and nice, hearty meal with friends and family. 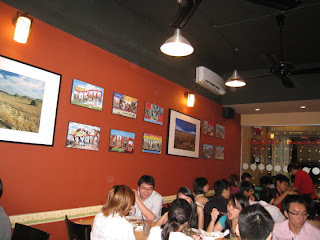 the cosy interior of the restaurant, on a busy night 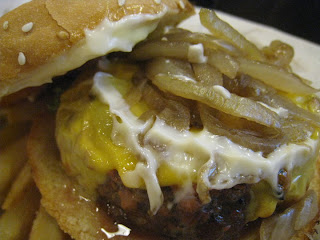 the cheeseburger. They have a couple of types, this is  the regular one, and they have something called the Juicy Lucy, in that one, they actually embed the cheese inside the patty. 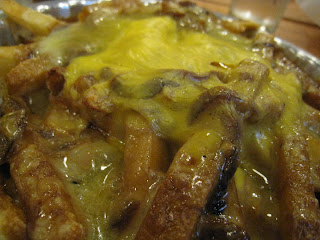 Dog food, looks gross, but it's seriously yummy. A tray of fries, baked with gravy and cheese and onions. All sorts of gooey, unhealthy goodness. Don't try to eat this alone. Trust me. It will be painful if you try. 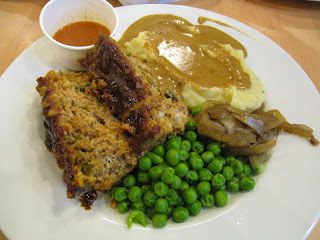 The meatloaf (RM15) comes with peas (my favorite!), onions, and mashed potatoes that are silky smooth with yummy gravy on top. At first looking at the pictures I thought it was bacon on top, but when it came it was actually barbecue sauce. The meatloaf tastes good but I found it to be a little too soft and crumbly (I like my meatloaf to have a little bit of bite). Still good value and good flavor though. 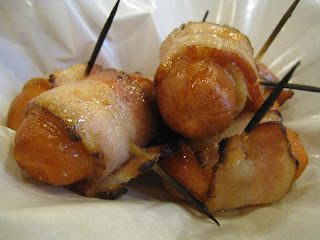 Pigs in blankets - sausages wrapped in bacon. The bacon was fatty and added a whole new realm of flavor to the sausages. Oh, and did you know that natural fats don't add to cholestrol? :p 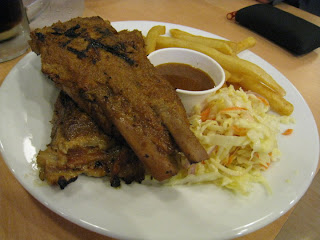 Ribs (Rm32 or somewhere thereabouts) - They were okay, nothing spectacular to shout about but still tasted good. 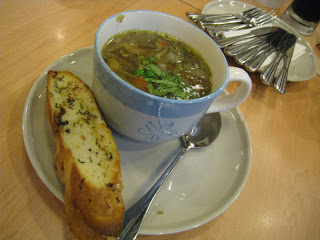 Soup (RM8) - their soup is generally very good, they change the soup every week and it's always a clear broth with meat and vegetables, very nice, heart warming stuff. Definitely a recommendation. 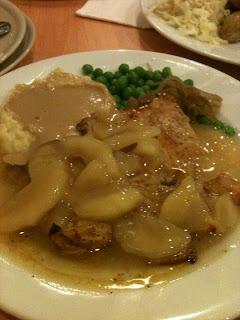 Pork Chop with apples (RM23) - Most people who saw this were rather disgusted with the idea of having savory stuff with fruit. However, pork with applesauce has been an American staple for what, centuries? Decades? I won't get into that, but the marriage of pork with fruit actually does work very well (for those of you who still can't wrap your heads around it, doesn't sweet and sour pork also have fruit, in the form of pineapple and stuff?) 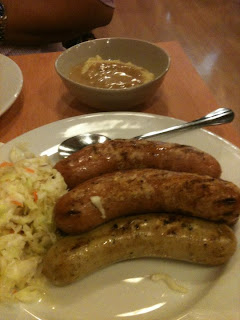 Sausage platter (RM35) - probably the most expensive thing on the menu, you get 4 (yes, FOUR) large sausages (the real thing, not the over-processed junk we normally get) of different varieties with coleslaw and fries (in this picture my friend asked to have them replaced with mash). The sausages are meaty and bursting with flavor, although I think one of the sausages wasn't to most people's liking (it's a soft white one, I can't remember the name now... in German it would be weisswurst?) 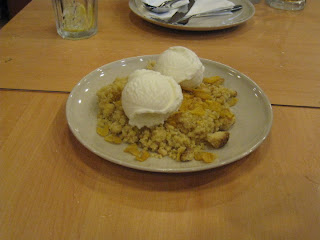 Apple Crumble (RM8) - nicely done with ice cream. Purists will be appalled that they make their crumble with cornflakes. It adds a nice crunch to it, and it tastes good, with the apples, crumble and ice cream making a nice combination.
All in, Betty's is a value-for-money place that has no airs or pretences at trying to be what it's not. What it is, though, is an honest to goodness family place that unapologetically serves pork, pork and pork. There are non-pork options for those who are not inclined towards that direction, such as fish and chips and fried chicken, but the specialities are the pork. Also, the house lemonade is pretty good, and one of the cheaper drink options on the menu.
And here we go, the ratings:
Food: 7.8/10
Drink: 6.5/10
Service: 8.1/10 (can be a bit slow, but always polite and with a smile)
Where is it?
In Aman Suria, facing the NKVE, it's just a few doors away from the Kayu Nasi Kandar.
No comments:

My apologies, have been too lazy to actually write words, so I've been posting pictures in Facebook instead. But anyway, some of the latest places to be visited and reviewed (and if I have the time, reviewed here) are as follows, with a short summary.

Betty's Midwest Kitchen, Aman Suria - Simple, hearty American fare. With pork, lots of it. What more could a carnivore like me ask for? Meatloaf, baby back ribs, burgers, steaks, apple crumble, and more. Food is high quality stuff, too, and it won't break the bank. Most expensive dishes are around RM30 or so, while regular stuff like meatloaf and burgers are well below the RM20 mark. Definitely will go again. 8.1/10
Kitchen Creatures, Centerpoint BU - Attempts at Western fare, it's main selling point is that there's no service charge or tax. If they could just improve on the food and drinks, I'd gladly pay the service charge instead. Very average food and extremely watered down drinks. Not too keen on a repeat visit, especially if they can't really even do a cup of coffee or a simple hamburger right. 4.1/10
Tao Cuisine Buffet, Sunway Giza - an ala carte buffet that was unexpectedly good and high quality. Most of the cold items such as salads, sushi, sashimi, oysters, etc. are laid out on the buffet line, while teppanyaki is made to order and almost all hot dishes are also made to order and brought to the table. The teppanyaki beef is tender and juicy although can be a tad too salty for some, while the teriyaki butter fish and salmon and grilled lamb chop are fantastic. At RM58++ per person, not the cheapest around but worth the price. 7.5/10
No comments:

Chance for a free holiday? I'll take it!

WOW Philippines Travel Agency, Inc. is celebrating it's 5th year in business during July of 2010, and we would like you to have a chance to celebrate with us, so we have decided to give-away a FREE Boracay Package complete with 5 Star accommodations at the luxurious Le Soleil de Boracay Hotel on Boracay Island. The lucky winner will win the following Boracay vacation package.

Was supposed to go for someone's birthday dinner at the Farmland Steamboat place in SS18, but with poor planning and other unforeseen circumstances, we ended up at the new Empire Shopping Gallery, and only three of us.

Parking was still free, and about 2/3 of the shops are open. We wanted to have a simple dinner at Chili's but it was closed. That sucks. But thankfully I spotted Belanga on the list of restaurants, and it wasn't crowded like most of the other eateries.
Belanga is a place specializing mostly in the food of Kelantan and Terengganu. Which means their specialties are Nasi Kerabu, Nasi Ulam, and the like. We had two orders of Nasi Kerabu (RM13.90) and one order of the standard Malaysian favorite, Assam Laksa (RM9.90).
The Nasi Kerabu come with either Ayam Percik (marinated barbecued chicken with spicy gravy) or roasted beef tenderloin, or grilled fish. We had one with the chicken and one with beef. The rice was soft and tasty, and mixed with the kerabu sauce and fresh vegetables and a bit of salted egg (which you do yourself, if you like the flavors all mixed in). The chicken was nicely marinated, and came as an entire chicken leg (drumstick + thigh, for the uninitiated), while the beef was slightly tough but tasted pretty good nonetheless.
The Assam Laksa came as a large portion, and was nice and fragrant, with lots of fish in the soup, and tasted pretty good, just a tad spicy.
Overall the food is pretty good, most would argue, why pay so much for eating simple Malay food when you can get it elsewhere? Well, this place is pretty reliable with the quality, and the cleanliness, and comfort levels. Plus, you won't normally get the same combination of all the different types of Malay foods at the regular warongs and stuff. So there.
Ratings
Food : 6.8/10
Drink : 6.7/10
Service: 7.1/10

P/S:- yes I forgot to take pictures. Didn't bring camera, and I was hungry
No comments:

(well, most of them anyway) are taken with either:
Canon IXUS 860 IS
HTC Desire

sites & blogs I hang out at

Petfinder - I support this! Adopt a pet!